A local rock band and 2 bands with some roots in Brooklyn shared stage on a quiet Monday night at Kung Fu Necktie. I last attended a show at KFN in late Janaury, just before I became very ill. Back to the scene of the crime, I was suprised at the lack of any sizeable audience. You never can predict audience turnouts, tho I suspect the moon is involved.
Cold Roses, named for a Ryan Adams song, are stalwarts of Philadelphia and the Delaware Valley area. Rhythm guitarist and lead vocalist Robert Clancy presented a solid performance, with a new member Steve Lynn on guitar. The sound is soulful, some country, some rock, some blues. This was my third time seeing the band in the last year. They made available t-shirts and stickers with a new logo. In March the band spent a week touring the Southeast, along with recording a new album, getting funding from their fans for the recording costs. 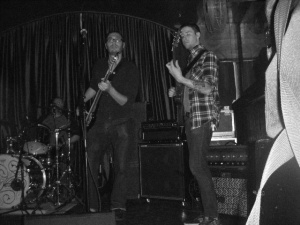 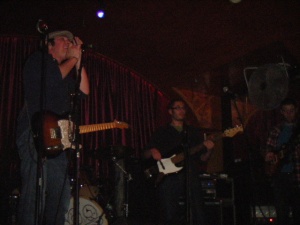 Luke Roberts, from Nashville, and who lived in Montana for sometime, performed solo acoustic after Cold Roses. Luke has an upper baritone register voice, a quiet delivery on acoustic. He dressed in a white and blue country-music getup, tho no hat. One song, Epcot Woman” almost seemed lifted from Bob Dylan’s 60’s discography. Another ‘Brown Bird” he introduced as a song that his grandmother had taught. The entire venue, exposed to the stage in back, were still as one as Luke belted this song in a capella style. Twitching his right foot on occasion, song for song, he shares his personal myths and sings of fears, but delivers them with strength and honesty. 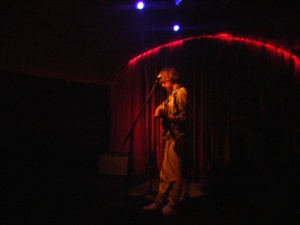 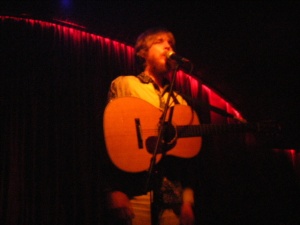 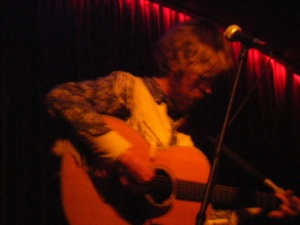 Country Mice, an indie rock band with strong leanings toward late-60s and early 70’s rock, are based in Brooklyn, and chose this venue to finish off their 3rd cross-country tour experience. Similar to Cold Roses, this 4-piece is rather edgy, tho they tend to jam more often, not unlike The Allman Brothers. Country Mice are big not only on the jams but changing the intensity of a song in performance, which puts them a bit into Neil Young/Crazy Horse territory. Lead vox and guitarist Jason Rueger fiddled with the pedals and electronics in front of him, creating bleeps and squeltches for a solid minute on one song. 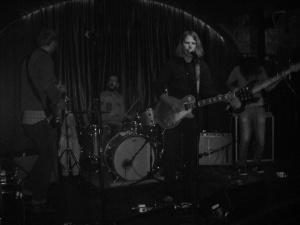 And for the rest of the photos, see the latest Facebook gallery