Armed with Stash peppermint tea, going to a Reiki share today, getting multidimensional in the process.  Before lifting off out of here, some musings for you re Friday’s shows.
I’m in the habit of attending 3 shows a month, doing very select interviews with great artists like the ones you hear on my show, plus add some photos, audio and video. Not a bad gig right? It’s about time I got paid for this sort of work. I am exploring that now, while leaving some other ideas off the table for now.

Red Abbey, a band from Hoboken, NJ, now firmly centered in Las Vegas, were the reason for my attending The Legendary Dobbs.  I hung with Thien-nga and Trey Ordaz in the performers lounge upstairs…a tired old room with graffiti galore), a loveseat and singular comfy chair, and an HD screen airing constant music videos. Plus a great view below to the intersection of 3rd and South.   I had no desire to interview the duo-led quartet; instead we chatted amiably about my life in Philly so far and their lives balancing touring and teaching.  They have their own music school at the home base, and plan to tour 3 out of every 4 weeks.  They are very much on the rise and know they will ‘make it’.  I feel privileged to have known them from nearly the beginning.

2 stories below on the main level of  Dobbs I saw local indie band Johnny Action Figure perform some engaging pop-rock which had most of the audience at attention. 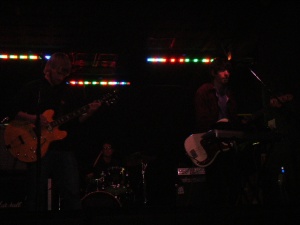 Following them were a West Philly band The Tressels, putting on every guitar-oriented stage antic you could think of. They sound as good as they look and that’s no lie.   I mean, look at them already… 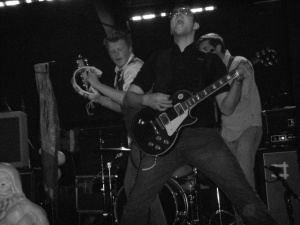 Red Abbey performed next to a modest but engaged audience and staff. Thien-nga thoroughly works the stage between vox &  electric violin.  Trey, wearing his AC-DC silk-screened shirt and requisite jeans and boots, plowed along on guitar. 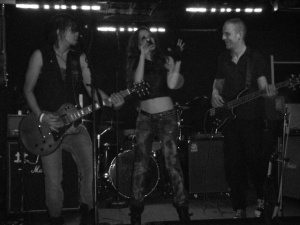 They performed mostly the songs from “Bulldozer” and closed with this number, a song they’ve yet to record (more good video from other shows at the YouTube channel)
The band are in the midst of an East Coast tour. My understanding is that they’ll next invade the West Coast. Yes, then TX.
Da Rezarekt headlined with hip-hop, fueled by rock, horns and a party atmosphere not unlike P-Funk.  Their guitarist, Marisa Salazar, is starting chemo for breast cancer, and it’s her last show with the band for the time being. Next gig for this band is in April Note the man in top hat from The Great Socio,  a local band who’ve just completed a residency at The Grape Room.  The band had a great moment in the middle of the set inviting ladies in their First Friday best to ham it up on stage while the band jammed it up.

I received CDs from a few of the artists performing this night, and will certainly have them on the big radio radar in future weeks and beyond.

Looking over conversation with Moozone about media hosting.  Looks like I may have the opportunity right under my nose to get my mp3 files here and podcasted from there.   Things are looking up again!    I’m partnering with this company to have artists sell merch and music.    Anthony, if you’re reading this, you’ve an email on the way later today.
Also organizing my notes re featured shows on Moozikoo Radio.  I’m nearly ready to get some 30-minute featurettes done, spotlighting top artists that you’ve heard on Radio Crystal Blue in the past.

Still tingly over having the domain point here.  The Google site is still there for posterity but am encouraging you to make this your primary destination for all things Dan Herman, Radio Crystal Blue, and any other related activity.  Yes that includes the stat blog where I occasionally muse on handicapping and sports-related stats and biorhythms.  What I will leave out from here is the mildly drunk recollection of a beer pong game somewhere in Bella Vista in the wee small hours.