This show at Milkboy Philly was nearly off my radar until the prior evening. Two weeks prior I had received a postcard (remember those?) from Brooklyn’s Food Will Win The War, mentioning this particular event. I filed it away and paid a bit more attention to emails alerting me to other events. Then I heard from Marc Cantone, who fronts the Brooklyn indie pop band The City And Horses, asking whether I’d like to attend. I said, sure, with barely any recollection of who else was on the bill. So I check out the lineup online…it’s Food Will Win The War, The City And Horses, and…wait for it….big local favorites The Way Home! Plus there was West Philly Americana hybrid band On The Water as the opener. From what I recall, Food Will Win The War and On The Water have shared bills previously, as has the latter band with The Way Home.
The audience was pretty vocal throughout and thinned out a bit later. The sound at Milkboy was strong all through the evening.
On The Water are a large ensemble perform songs with their lead singer Fletcher Van Vliet commanding in ragged voice, not unlike Tom Waits. The music is even-tempered in waltz time for the most part, and rides the chemistry of the band, who were eight-strong tonight. Instruments were two acoustics, banjo, snare drum, toy piano, bass, fiddle. A lot of hollerin’, a bit of croonin’. 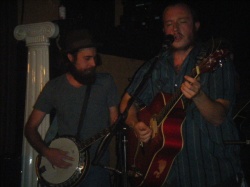 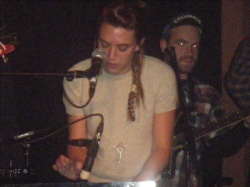 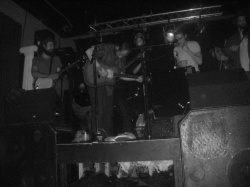 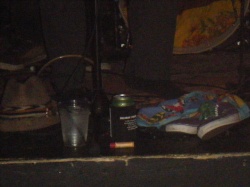 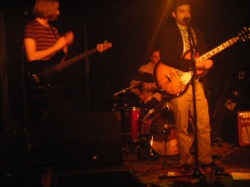 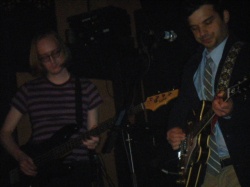 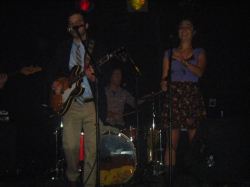 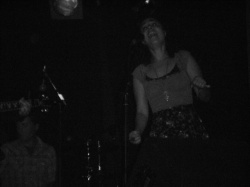 VIDEO Of The City & Horses with Carlie taking the lead
Food Will Win The War are billed as ‘glockenspiel rock’, tho I have to admit I barely could hear said glockenspiel in their set. Rockin’ the glock’ is Devlin Rodriguez, whom I’m told was once was part of this band.  This six-piece band grooves has lead rhythm guitar by tall baritone Rob Ward, anchored on keys and accordion by the well-groomed Scott Stein, and others checking in bass, drums, and a rather animated fiddler. This was the final night of a 8-city East Coast tour outside of the home base in Brooklyn. They perform 10/17 at Bowery Electric during the big CMJ Music Marathon. The band is big on chemistry and good harmonies. Having been around for about 10 years plus, they know exactly how to deliver a good show, even when it doesn’t rock out fully. 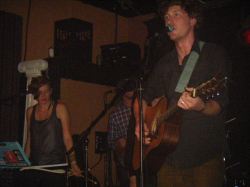 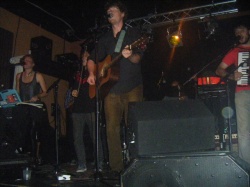 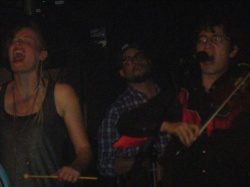 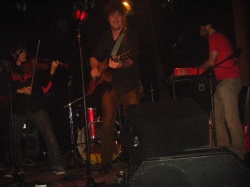 VIDEO of Food Will Win The War
The Way Home are beginning to tour around the region themselves, with upcoming shows in DC, western PA, eastern MA, CT, and upper NY.
This was the band’s first fully acoustic show, a bit different from a similar gig performed at Sine Studios that I covered for you way back when. James rocked the acoustic, with Daniel Drago on bass, Nick Hughes on drums, Henry Nam on accordion, an instrument he was just beginning to learn. Henry sounded just wonderful on the accordion, making it sound like a Rhodes, having me forget this was an acoustic set. A truly clever, well-thought set and arrangement was experienced. James would intro each song either promoting the CD, talk about the lyrics, shout out a few folks, or otherwise would say “This is ‘The Way Home’ “. They didn’t have to break the fourth wall. It was at tho, despite the mild turnout, that one could easily connect with the band’s ethos. And if that doesn’t grab you, you should have been singing along with the 4-part harmonies (kind of the way The Eagles did). I was. 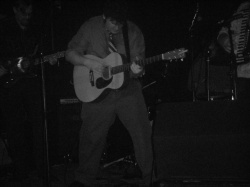 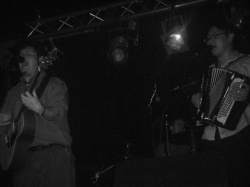 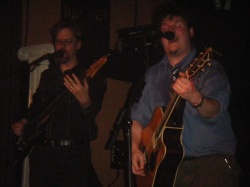 VIDEO of The Way Home
After the show I caught up with Dave DeHart, who is in the bands The Gang Age and Donovan Rice‘s band The Standing Cinema. I had seen both bands last summer at The M Room, and covered this event last summer
Lots more photos on Facebook
Advertisement