Another fun night at The Grape Room, with several local acts plus one from my NYC stomping grounds on the bill.
“Hi, my name is Paige, and I sing songs that I make up”….So began the set by Paige Allbritton, veteran singer/songwriter who loves life, loves to perform, and who had last released music in 2007. She performed in blue jeans, toned blue-square patterned shirt, with a red-heart sticker to show off her love for her mom (it would be Mother’s Day the next day) and a cherry-wood Ibanez acoustic. She owns a clear, strong voice (a bit of Joni Mitchell’s trill), and a stage presence that’s both serious and mirthful. Two of the songs in the set were especially well received, “Love Of A Lifetime” and “Secrets”. Both songs would fit well in TV and film. She closed with “The Killing People Song”, which represents a few of the themes in her songwriting, somewhat dark and reflective. One song I recall had references to Jack and gin tho I don’t recall  the title. Performing on standup bass was multi-instrumentalist Reverend T.J. McGlinchey. 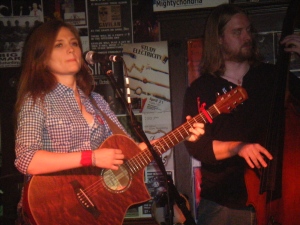 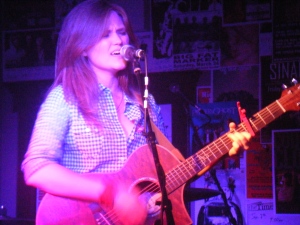 Chris Schutz and The Tourists celebrated the release of their new CD “Summer In The Sun”, firstly with a handsome food spread on the 2nd floor, then following with a solid pop-rock effort on the main level. This is a 7-piece band with keyboards, drums, 3 guitars, and 2 backing vocalists. Their music style varies between the various members. A proud independent-music veteran, Chris told me before the show that all the members are classically-trained, conservatory graduates. And, indeed, Chris does have a firm hold on the band’s sound, orchestrating their sound and orientation on stage carefully. Their approach recalls Elvis Costello and Graham Parker, with guitars and keyboards ringing strongly in each song. For most of the show they kept to one principal vocalist (I believe her name is Steph Hayes), and their 2nd joined in on a few. Chris’s stage experience was evident, scoring well with his original material plus a cover of The Beatles’ “Golden Slumbers”. Chris was dressed in dark blazer and slacks, plaid tie, pinstriped shirt, and (keeping it rock-n-roll), green lace-up shoes, matching his greenish-blue Lakland bass. 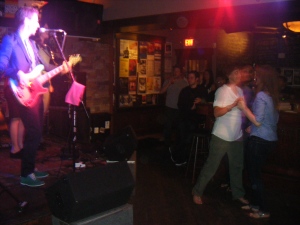 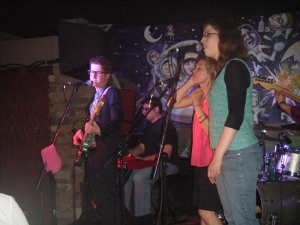 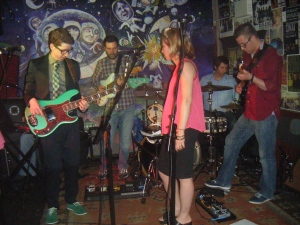 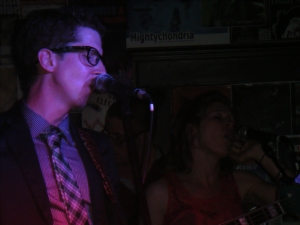 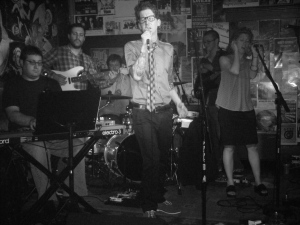 NYC’s Paper Doll have consistently stuck to mainly the same band members in their 10-plus years performing, along with their own strong pop-rock style. It had been nearly 10 since I had seen the band myself, when Teresa was still in college.  They have toured worldwide with their efforts, including China several times. Tonight was their first gig in the Philly area. They previewed new songs that will appear on their forthcoming CD “Ballad Nerd Pop”  Teresa was contorting, strutting and constantly engaging the audience from the stage with a call-and-response moment from one song “You Can’t Stop It”. Teresa knows how to dress the part too; a yellow-green leopard-print off-the-shoulder number, and a black-white striped mini. She performed also on a Novation synth while Patrick Moloney produced great classic rock guitar. Rhythm section was manned by Jack Koch (bass) and Will Haywood Smith (drums) 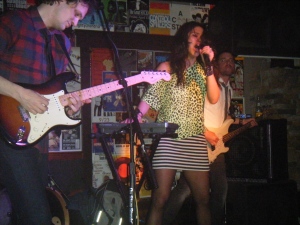 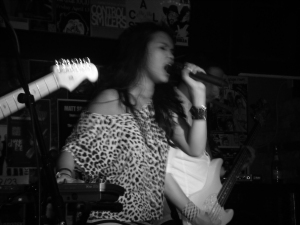 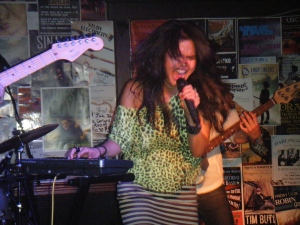 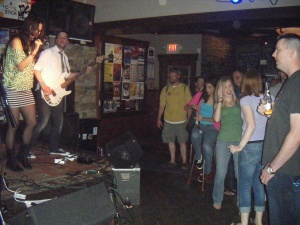 VIDEO of Paper Doll
With my schedule beckoning me back home safely, I stayed for just the first 10 minutes of Stonethrown‘s set. Judah Kim leads this band that has complex elements of rock, grunge and strong, emotive vocals between the 4 members. They’ve been around for 6 years and have a solid live following in Philadelphia. Earlier this year they released their latest EP “Chasin Me Around”. Among the items they had for sale were lighters with the band’s website and design. 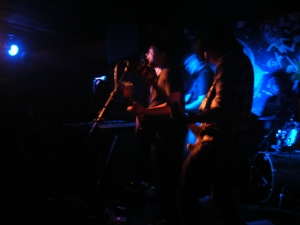 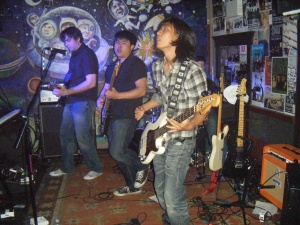 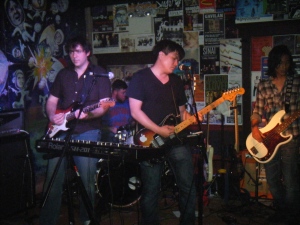 Local punk-rock outfit 58 Fury were the headliners. I wasn’t around to see this band, but they were primed to play for a large audience tonight, as their audience was filing in starting from Paper Doll’s set, 2 hours before set time.
More photos at the Facebook gallery.
Advertisement