Philly promoter Andre Coles, better known to locals as Boy Wonder brought his monthly HYPE! showcase series to The Legendary Dobbs on a busy Friday night. This being First Friday, there was a busier scene than normal outside lengendary South Street. The same couldn’t be said for the downstairs section of Dobbs, as part of the roof caved in and cancelled any action on that floor. Thankfully the 2nd floor was cleared for performance, thankfully.
Local songstress Emily Mineo did a handful of songs, solo & acoustic, showcasing a great vocal range. I understand she’s recording her first album. 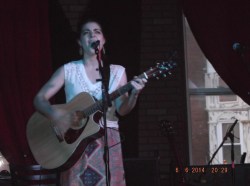 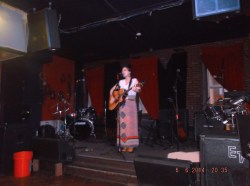 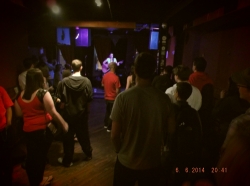 Upstate NY rock duo Sirsy performed 7 songs, including “Lionhearted” my favorite track, for the moment, from their prior album Coming Into Frame. I’ve seen Sirsy a handful of times, and the act doesn’t change much at all between the drums, guitar, bass pads, flute,….flute? Yes, on “Revolution”, where Melanie Krahmer’s marching band background comes in handy. You have to see this… 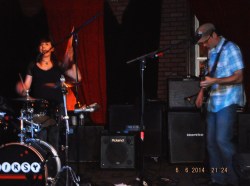 Following Sirsy were rhythm guitarist Chris Gennett and backing band The Bickel Brothers (John & Patrick, plus Gusten Rudolph), on bass, drums and melodic organ. Chris comes from a laid-back folk-pop perspective. Emily joined him on a cover of “Hit The Road Jack” and 1 or 2 other songs. Chris is just about to release an album.

After their set, the Bickel Brothers charmed the full audience with some cover songs. Kelvin Cochrane, late of The Absolute Zeros (did you know they reunited last year?, busted in and sang with the group a bit and danced with a few patrons, including Boy Wonder himself.

South Street looked like this afterward. I’m standing near Manny Brown’s where a musical duo barely on the sidewalk are playing to patrons inside.