Ron Bauman (The Discount Heroes) hosted a Yards-sponsored music showcase at Connie’s Ric Rac on Friday. Along with the local beer special there was a BBQ food truck for the occasion. There was also much chugging of the “Ron Bomb”, the house manager’s own take on the Irish Car Bomb drink (Yards substituted for Guinness, thereby keeping it Philly).

First up on the showcase around 10pm were The Resonators. The girl-guitar duo of Maura Mullen and Alex Berenson  present themselves rather alternatively, building their style on strong counterpoint harmonies, wrapping their voices inventively around their guitar chords. Alex performed on a classic Les Paul guitar along with ukulele. Maura was on acoustic. They included 2 Jack White-penned songs and a short Animal Collective medley along with their original songs. Fans of NYC songwriters Robin Aigner and Lorraine Leckie will enjoy The Resonators. The audience was very attentive to their sound. The duo are preparing to release their first singles both digitally and on disc shortly. 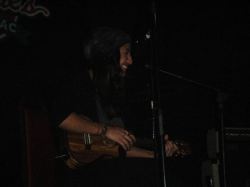 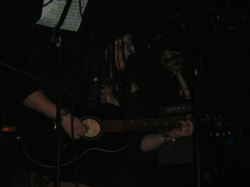 The Looseleaf Trio brought in and captured much of the audience. This young local power trio kept a strong insistent pace throughout their 45 minute set. Their music is original and danceable in the vein of rock and blues. It was bassist Andrew’s birthday, and the audience promptly serenaded him, followed by Ron with guest vocal on one song. They included a few covers at the end (I vaguely recall The Beatles and Sublime among choice songs). This trio has passion for days and are a hit with those who appreciate great underground-based local music. It’s difficult not to like a band with such youthful energy on stage playing their hearts out.

North Jersey band Dan Sheehan Conspiracy finished up this showcase with a guitar-drum duo set, Dan on acoustic/electric, James Venezia on drums (bassist Gian wasn’t able to attend this one). This was the band’s debut performance in Philly. Dan’s tunes are solid, rooted in classic rock, a new brand of classic to be sure. My favorite in the set was “See Kay”, which Dan says is about The Meat Puppets.
Next up for the band is the venerable Mexicali Live in Teaneck NJ on April 5. 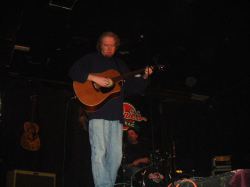 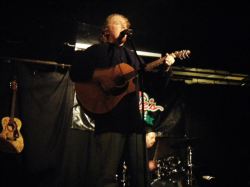 Here’s VIDEO of DSC
The Looseleaf Trio returned with a second and shorter set, mainly doing covers, plus a song called “Psychosis” with a long jam in the beginning.

Lots more photos where this comes from in my latest Facebook gallery.