Local songwriter Mat Burke celebrated his latest birthday one day early with a Monday unplugged showcase presentation. This took place at Silk City Diner & Lounge just inside the Northern Liberties section.
I had not yet discovered the diner and wasn’t in the mood for food, but was there initially before being pointed to the lounge doors. I chatted a bit with Bucks Country acoustic-punk brothers Corporate Hearts. Mat was also outside to chat with them. I had ordered a Flying Dog Snake Dog IPA, strong bitter, flavorful stuff from Wisconsin. Got me off my edge after a while. This is a sipping beer, folks. A good sized bar, TV tuned into wrestling, some exotic paintings on the wall, attentive barkeep and generic rock show lighting to illumine 5 different regional acts.
First up was Chelsea Mitchell, a local singer-songwriter with a strongly developed style in sound. She had mentioned to me she listened to a lot of Joni Mitchell when younger. I was imagining her enjoying rather literate songwriters such as Elton John for such a muse.Her songs enchant the audience, one by one. Not much stage movement, no flash; just honest, truthful songs of love that command attention. Briefly she was joined by a guy on pedal steel and also banjo She closed her set with two songs on ukulele. I dare say she’s the doppleganger of Austin, TX’s Carrie Elkin.

The Corporate Hearts are Zach and Craig Needles. The brothers, based in Bucks County, sing their uncorporate hearts out in the spirit of antifolk and a decided punk attitude. Their songs are those for the working indie man, true tales of life as a starving artist. My favorite song from the set was “21 Is The New 65”, featuring the phrase “Not so much these days”. (And it mentions Kerouac, a favorite author). I had last seen The Corporate Hearts in April 2011, on a bill including Mike Herrera of MxPx, and NYC’s Gasoline Heart. It had bee the duo’s 5th show. Now with a demo and full album beyond this, they are steadily performing around the Delaware Valley, and toss many non-sequiturs their fans’ way on Twitter. 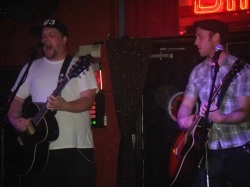 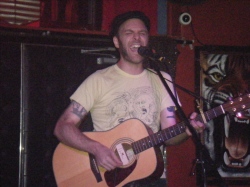 Tonight’s host Mat Burke brought his personal style of country and modern acoustic. We had last met at the now-closed Tritone in December 2011. Mat has a great sensitivity that is evident in his songwriting, including the closing song, something of a confessional. He and Levee Drivers’ August Lutz kicked off their 10-day “Death Of Rock N Roll Tour 2012”. They will be performing in TN, VA and AL. 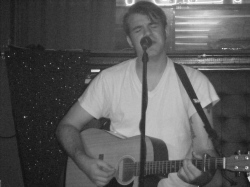 And speaking of Levee Drivers, it was an unplugged set tonight, as August led on acoustic, newest member Amber Twait on tambourine and harmony vocals, and Kyle Perella on pedal steel. If you haven’t seem yet, think of them as Philadelphia’s answer to Jon Spencer or Andy Friedman. Among the original tunes were covers of Dolly Parton and The White Stripes.

Better yet, check out this VIDEO, two songs worth. http://youtu.be/sqvyEPBjlJo
Mat told me it was a ‘weird’ lineup via genre, but each performer being friends with each other, it wasn’t truly weird at all. Especially not for a low-pressure Monday
After the event I was introduced to Josh Friedman from a strongly up-and-coming band called The Lawsuits. They appear to bring out the best of early country rock and 70’s pop, right in the heart of what would pass for classic rock from the 70’s itself. Josh recognized me and my show; he’s an avid listener! I imagine them as one of the two main sounds coming out of Philly, with acts such as what took place at Silk City representing the other half. The Lawsuits recently played the Caravan Festival in Maine. Upcoming shows are all in Philly throughout August.
More photos in the latest Facebook gallery
Advertisement