It one was of those times you had to go somewhere you hadn’t been to in a
while, a place that wouldn’t rank very high on my list of music venues. The
feng shui is weird, there is smoke. Classic Philly dive. And it’s on my
radar because a certain band, already on my radar, was playing there. That
band is Dizzy Bats.The venue: JR’s Bar.

Connor from Dizzy Bats put together the showcase, a good sounding
lineup with bands stretching between pop, punk, rock, metal and even
post-punk at times.
First up were Strange Chameleons, a local guitar-drum duo. The
vocalist/guitarist was pretty solid, sporting a rather imposing oversize
guitar with an orange tiger print. The songs are essential pop-punk,
relying on high vocals and tight harmonies. “Top Sirloin” in particular was
my favorite. sounding like honest homage to Green Day. 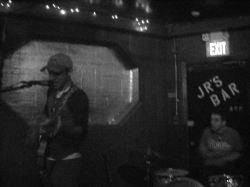 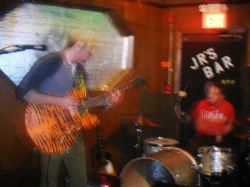 Next the scene turned to metal and the Scranton, PA quintet Silhouette Lies. One
of their 2 lead guitarists produced a distinct ringing or chiming sound,
balanced neatly by the loud bass up in front. Clad in red shirt and long red
handkerchief tucked in dark jeans, lead singer Nick Van Wagenen showed off
much the way a main vocalist should, constantly moving, egging on each of
the members. Bassist Nick Savinelli, with about as much long hair as Nick,
was just as proficient in the chemistry. Their next show is at The V-Spot in their home base. 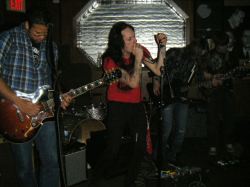 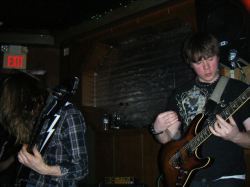 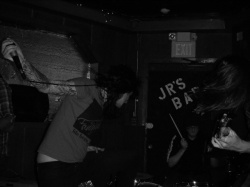 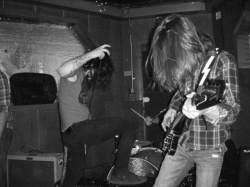 Checking in from the New York metro area, Dizzy Bats are strongly methodical
in their approach to power-pop. No real flash in their style, sticking to
good pop and rock hooks through their set. Connor’s vocals are Several
times he exhorted the small audience to stand closer. They have a ton of more shows ahead as
they continue to introduce their sound to the Mid-Atlantic and Northeast states. 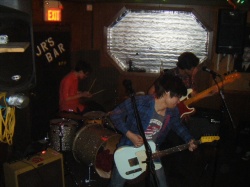 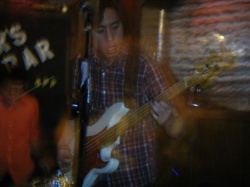 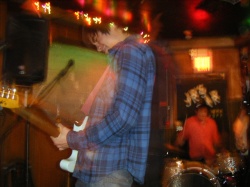 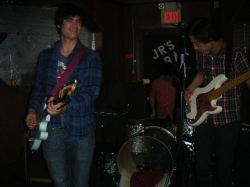 I was most impressed by the West Chester, PA band New Shields, who have
sensational guitar hooks. Notable tunes include “Proximity” and the song
that followed in the set. Keinan Fry is the mastermind on both rhythm guitar
and Korg, with something of a post-punk chiming guitar sound. Overall the
sound is head-bobbing, danceable and just good fun music. They included a
cover by The Killers and I think one other tune besides. Their main
guitarist seemed to have an issue with his cable, and had to borrow the
decorative orange-tiger striped guitar from Strange Chameleons. 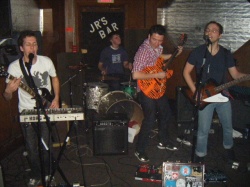 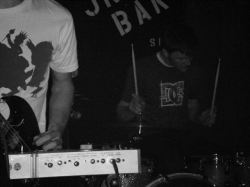 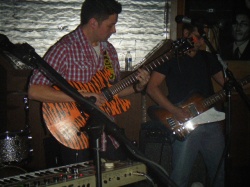 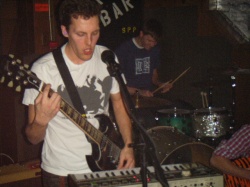