Thursday was a day built for theatrics at The Grape Room. All the artists in this showcase had some sort of visual art going on, often leaning toward non-traditional methods of dance and performance.Opening act was local solo acoustic act boog. boog presents music with gruff voice and rough timed measures of words and chords. Gutteral acoustic blues is his fare. He was dressed virtually all in black including sunglasses, fancying himself quite cool. I enjoyed the latter two songs of his set which happened to be older tunes (these appear on his 2010 album “The Walking Club”). He’s firmly entrenched in the Philly scene and plans to do more shows in the Northeast.

Sylvia Platypus bill themselves as ‘psycho-Celtic’ rock. They are a solid six-piece with something for just about everyone. Not at all a quiet bunch, tho lead singer Janet Bressler presents a quiet power on stage, inwardly led to dancing, arms outstretched at just about any time in the set. She took her act to the audience in the first song, and performed a mock collapse during a closing medley of songs. The band includes Ruchama on bass, a well-hidden Rosalba on drums, Charlie on loud bagpipes, Bill on lead guitar, and Michael Southerton (Song Dogs & The Nightjar) with rhythm guitar. Good live show, very good groove if you dig psychedelic sounds. 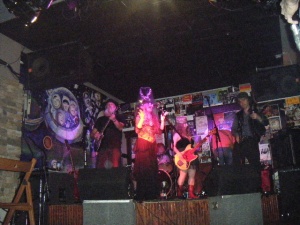 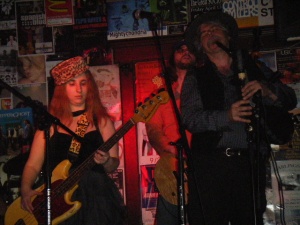 VIDEO of Sylvia Platypus: http://youtu.be/P96I_yVv0lY
The latter three bands on the set have been touring together. First were The Unholy Sideshow. They are just that, unholy and a sideshow, with music piped in on keyboard and piano by someone. There was a large metal apparatus installed in stage and the devilishly half-naked emcee who performed a dozen death-defying sideshow feats including hammering metal into his nose, gettting into and out of several animal traps (including fox and bear ones), and presented an assistant, Davy Danger, clad in leather and lace. Davy Danger did an exciting Houdiniesque upside-down straitjacket escape from said apparatus, and assisted with several other tried-and-true items like the bed of nails, sledgehammering a cinder block off the emcee. A few volunteers from the audience assisted in the closing act, where their donation of various dollars would earn them staple gun clips on various parts of the emcee’s body. Offers of $100 weren’t made but they would have been directed toward the privates. Great alternative to the usual tipjar passing, eh?

Mister Joe Black, from UK, performed seemingly authentic German cabaret, both solo on keyboard, and fronting a good band. He covered Britney Spears and The Weather Girls (you know, ‘that’ song) and included a few originals with such velvet-gloved, hat-in-hand forcefullness, complete with double- and triple- entendres). Pretty much everyone in the audience had visible grins on their faces, especially after enduring the sideshow antics on stage prior. 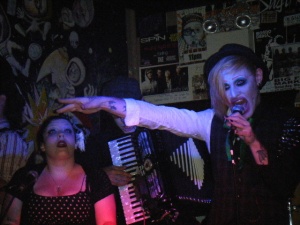 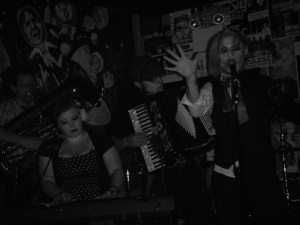 This Way To The Egress take their name from a P.T. Barnum slogan, have a great merch table, and provide cabaret, burlesque, and gypsy-punk sounds. They shared band members with Mister Joe Black, notably the fetching Rachel Galassi on keys and violin.

I stayed for the first few tunes, having to catch the last train out of Manayunk, if not the last bus. I also had enough time to get a customary meal at Frak’s. Their ‘Manayunk Fries” with cheese and bacon, is quite literally to die for, and at a great value for the portion size. No, the fries aren’t camera shy. I was just that much hungry.