An eclectic lineup of female-fronted bands took hold at The M Room here in Philly on Friday night, for the penultimate GoGirlsMusic festival event of 2012. Proceeds from the show went to two charities; local food bank Philabundance, and Wreaths Across America, which coordinates wreath-laying ceremonies. M Room, as usual, proved to be a bit of a challenge regarding sound, and there was a decent audience, but for the pure music lover and musician alike, the effort surely didn’t go unnoticed.
May is a bilingual dance-oriented songwriter with upbeat backing tracks and positive outlook to match. She performed with bass and drums alongside, which she mentioned to me is still something to get used to. She appeared both structured and inspired on stage, bouncing around a bit on a few tunes. She wore a strong sequined red shirt under black suit for the occasion, which looked  great in the general darkness on stage. 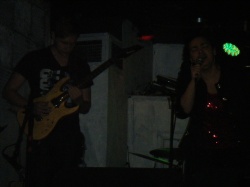 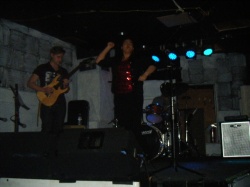 Lori Citro, in comparison, was gentlest of all the performers, and for this reviewer the best with stage presence. She performed on keys with sax and drums backing up.She has background in musical theatre along with songwriting, and was willing to tell stories of the songs with both humor and poignancy. Notable songs included “Dorothy”,  an ode to the musical “Wicked”, Love is first and foremost in her material. 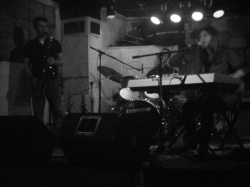 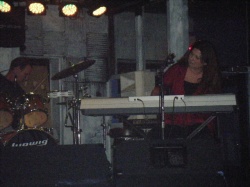 Gina Cieri runs the Philadelphia chapter of GoGirlsMusic, and does duel lead guitar with twin sister Tina in Prima Donna. This local band, with a good regional performance history presents original songs in the vein of classic rock, recalling at once Heart (twin guitar attack), The Doors (mythical lead singer-poet), and possibly Blue Oyster Cult (slightly progressive, great solos). Prima Donna have been around for about 10 years with several lineup changes, the current one is closest to the original. As I understand, Gina is the mastermind, writing the music and lyrics. The hooks are excellent, with a few good solos amongst the songs performed. Lead vocalist Kelly Werkheiser has a good attitude on stage channeling some anger within the song and commanding her place well. Prior to “Fire Me Up”, she exhorted response from the audience. 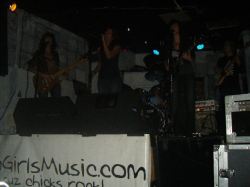 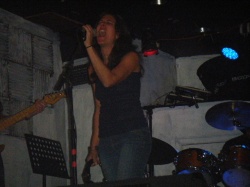 Grown Up Avenger Stuff are from North Carolina, a 4 piece with one general tone, and that would be loud! Lead singer Deirdre Kroener was in complete control, with a focused attitude on getting her message across, and doing so in restless fashion. The band followed in time to her wails and shrieks, rocking just as hard without vocals themselves. The music itself resembles hard rock, with generally blues motifs, again recalling The Doors, Led Zeppelin and similar bands. Sporting a sparkly black top with a small sequined design, and rocking multiple tattoos along her forearms (one containing original verse, Deirdre appeared devoted to her cause, simply to rock out. Nothing is left to chance sonically. She has a naturally high voice that she doesn’t turn up to eleven, but it gets up there. They closed the show with a very short number that was loudest of all. Outside of a short tour in Western Canada, they are making their first real foray outside of their homebase, touring across the East Coast. Easily they are the loudest band I’ve heard outside the Carolinas. Talking with them after, I learned that they are friends of The StereoFidelics, fine noisemakers themselves. 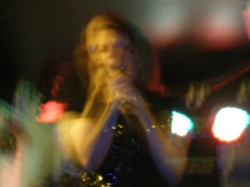 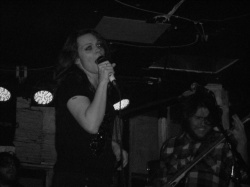