Earlier on Tuesday I traveled to NYC to get my point-and-shoot camera to get a general cleaning and to replace a battery door. The work took all of 10 minutes. Photogs, if you want solid service, please patronize the good folks at PhotoTech in Union Square.
Having mucho time to kill before my Megabus ride back to the Illadelph, I did a lot of walking, along with window shopping between Union Sq and Herald Sq. It didn’t take long for me to get my NY walking stride going, instincts fully in street-smart mode.
Suffice to say I almost couldn’t tend Tuesday’s show, had I not had the healed camera in my clutches. But the Fujifilm camera is just fine, and works like new. I was in attendance to see Brooklyn’s Freddy Hall & The Best Intentions, along with Denver’s Flashbulb Fires. There was a rather small but eager cheering section for both bands. Freddy is a young, humble songwriter with a Zen attitude to music. He’s equally capable of a an acoustic folk-rock Dave Matthews-like tune, and then turn the song inside out and bring in some audial pyrotechnics. Freddy’s guitar is versatile, between ripping up chords and being poignant on acoustic, changing moods within a song. He sports a clever use of words and lyrics, and a bit entertaining with the stage banter. Their drummer Marques Walls was particuarly hard hitting, and added occasional percussion with most of the song. Their bassist (name unknown to me at this moment) wailed away alongside through the show. Their next show is at Bar Matchless (whose performance space closely resembles The Fire here in Philly) is on 10/21, just after the CMJ Marathon madness.

VIDEO of Freddy Hall:
Flashbulb Fires, like Freddy and the band, are a trio who are on a cross-country tour; they started this tour in Lincoln NE on 10/10. Their  CMJ gig is at the venerable Rockwood Music Hallon 10/20. The trio are Patrick on synth, Michael on lead guitar and Chris on drums. They kept the instrumentation relatively sparse but one wonders how they actually conceived and produced such amazing beautiful noisy sound for studio and on stage. I did spot an large aluminum pan between Michael’s stomp boxes, which he did use as extra sneaky percussion. I was immediately reminded of shoegaze types, those with a minimal of haunting words and a lot of strong chords and arpeggios plus a bit of electronics but not overpowering or taken away from Chris’s own strength there. Michael would bend forward at times getting into the music, Patrick would gesture with hands and slight wails as he involved himself at the lead. The synth was magical with a church-like Rhodes sound, and other times resembling Mark’s own guitar. There needed to be more of a light show with their presentation but they had plenty on stage, what with an amp decked out in Patrick’s synth whose front was covered in dark curtain and more flashbulbs. 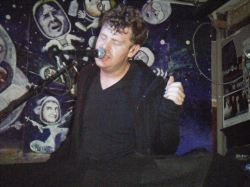 VIDEO of Flashbulb Fires:
Before leaving for the bus back to the civilization that is South Philly, I picked up CDs from both bands, plus a free one by local outfit The Defog, a rather conceptual, experimental band that had performed at The Grape Room on 10/6. Near the stack of CDs was a sports cap plus a sticky from an event promoter inquiring about gigs.
I had to dodge various wandering happy drunks on Manayunk’s Main Street. Is it a class thing? The idea that the higher in social class you are, the wilder and happier drunk you become? That’s how it appears to go in Manayunk.

Like Loading...
This entry was posted in Uncategorized and tagged Dan Herman, Flashbulb Fires, Freddy Hall and the Best Intentions, PhotoTech, The Defog, The Grape Room. Bookmark the permalink.