San Francisco-based songwriter Jeff Campbell highlighted a night of acoustic-oriented acts at The Grape Room on Saturday. I briefly chatted with owner Scooter outside; we had last met at Milkboy Coffee 2 weeks ago when he backed longtime bandmate Stephan (Steph) Hayes.
An acoustic trio doing various cover tunes opened. Billed as Hot Spoon Gilly, this local group serenaded the half-full venue with various cover songs. Someone in the audience was celebrating a birthday Some notable covers were Bob Marley’s “Stir It Up”, Cracker’s “Low”, OutKast’s “Hey Ya!” and a song about mountains that I couldn’t quite place but really liked. The trio are Devon (lead vox, acoustic guitar), Ryan (2nd guitar) and Denise (vox). Devon mentions to me that the band is just starting out and are slowly learning some originals. 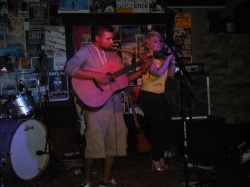 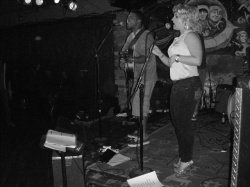 Reno Nevada’s Justin McMahon, touring with Jeff, was up next, doing a solo acoustic show. Justin’s voice has a certain Don Henley/Billy Joel warmth, a reserved high croon, and an earnest nature for telling stories. Each song was introduced with at least one anecdote. He mused openly about writing country songs, stating that there is only desert in Reno, and Reno is not exactly country territory, yet no one has yet come up with a definition for “desert music”.  During the set he performed two songs from his new album “Second Chances And Irreparable Mistakes”. “Pretty Words” in particular was notable for its life-affirming lyrics. He revealed a simple solid stance throwing himself into the lyrics. Justin began an East Coast tour 2 weeks ago and has performances ahead across NY State and New England before heading west again. 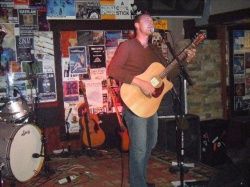 Jeff performed the majority of songs with his band, and did a few solo tunes, plus one with his drummer. Jeff has roots in Delaware County, and his family came out for this one. Most of the birthday crowd paraded upstairs to the lounge but more folks arrived downstairs. I was moved by “Laundry Day”, a song of a marked intensity beyond Jeff’s acoustic. The band performed one song from Pine and Battery, Jeff’s regular outfit at home. There wasn’t much banter during the set outside of his expressing gratefulness for the hometown turnout. I spoke with Jeff and his mom after the set. I’m told that Jeff does tour the East Coast every year, and will be around the area in October with shows in NYC and Williamsport. I’ve been spinning Jeff’s music on my show since his solo album “Stop And Go”, and will certainly add Pine And Battery’s music to the rotation. 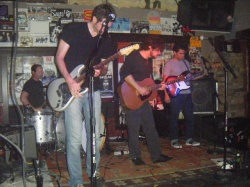 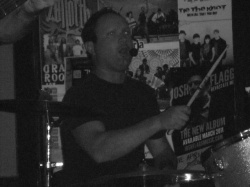 Here’s my video of Jeff and band performing “Laundry Day”
I knew nothing of the final band on the bill, but it was evident that they had a very nice following. Long Walk Home, from what I’m told by several audience members are busy raising families and just don’t play out as often as before. In fact this was the first show together in 2 years for this five-piece alt/rock band. They played exactly 1 song before running into serious technical issues. It appeared to be an amp but I’m not absolutely sure. They spent at least 10 minutes on the issue, and by this time I had to catch the last bus out from Manayunk. The photos I have is from that 1 song. 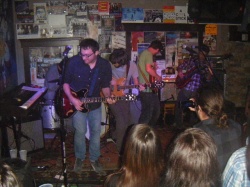 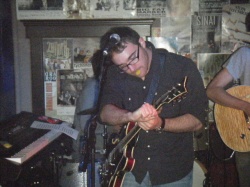