Saturday’s show at The Fire was put together by Steve Quaranta, on the occasion of his birthday. Steve fronts a new band Language Problem, who made their debut on this evening. Language Problem is a rock quartet with a unique styling of mixed measures, psychedelia, inventive instrumentation, and old audio clips between a few songs.
Claire on drums, Steve on keys and guitars, Mike on guitar, Brian on bass are from a collection of 8 former Philly bands. 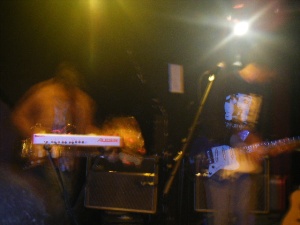 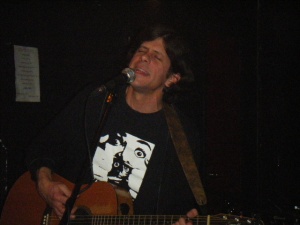 They have a few songs already out in the various social media circles and are recording more.
Opening the showcase were Gemini Wolf,  the dual keyboard/programming action duo of Mikronesia and Pandar. The latter does the strong vox and the general keyboard action, the former gets spacey and does more of the programming bit. They occasionally have added extra instrumentation in their sound tho Saturday’s show was simply the duo.Through about 7 selections, their songs are barely danceable but brief grooves to them, much the way Bjork and various trip-hop acts have sounded in the past, definitely moody and a bit dark. Talking with Mikronesia (er, Michael McDermott), he says he had composed an opera of their material titled Pangaea, over 10 years in the making. Michael is active in various artist projects involving sound, art, production and music for film and dance. Gemini Wolf have performed in just about every small and large venue in Philadelphia, and a select few in New York and other cities worldwide.
They’re playing next on 5/11 in Brooklyn, at Moon-ii, “an open video workshop..”

“Has anyone seen the Jimi Hendrix biopic on TV?…….Don’t watch it…it was horrible.. But really, you must see it. It was hilarious”. Paraphrasing here Dave Cope’s opening line to the audience as headliners Fantasy Square Garden prepared to stir up the masses. Having played a January residency at this stage, the band was very comfortable in their performance on Saturday. FSG’s members are active in other bands and solo projects. All of their material is penned by Dave, and all are original, tho borrowed heavily from various styles of music such as 60’s girl groups/songwriters, 70’s country rock, 80’s new wave, and a few places in between. The crowd was large and were dancing for much of the set. They are the sort of band one could picture seeing on some variety TV programs from yesteryear. A guy named Ryan, a huge fan of FSG, took to the stage to sing lead for the encore. “Business Or Pleasure” was a favorite. “I’m business, she’s pleasure” uttered stylish frontperson Ali Wadsworth, gesturing to sister and co-lead vocalist Claire. Ali was part of such bands as Unlikely Cowboy and Goldiebox. Claire, like Ali, is a Berklee College of Music graduate and boasts credits that include Andrew Lipke, Good Old War, The Wadsworth Sisters, and more. The sisters took a minute to do a playful original birthday song for Steve.
Chatting with Dave afterward, he mentioned being in the midst of writing and preparing to record songs for his solo album and doing a house concert in NYC. Dave has written hundreds of songs and is the mastermind of Fantasy Square Garden, present on rhythm guitar.
Also part of the mix are bassist Demian Mason, guitarist Andy Keenan, and drummer Kevin Killen (Hezekiah Jones, Chris Bathgate, Jason Crigler).
The stage and performance room was strewn with balloons, party favors and the usual birthday trimmings. 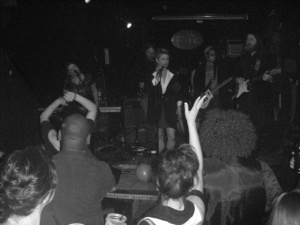 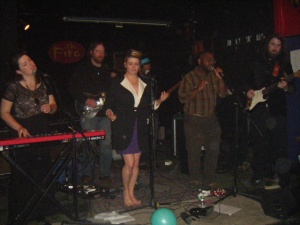 Full photo gallery at Facebook.
No video for this one. Had some trouble with the camera today. Next time!