4 bands, 2 from Philly, 2 from NYC did their thing at El Bar on Saturday. El Bar is underneath the Market-Frankford “El”, a block north from another corner establishment, Kung Fu Necktie. This being my first time at El Bar, I actually prefer it greatly to KFN, mainly owing to the decor and the sound. Lots of kitsch to be found along the brick walls, along with old posters, stuffed animals, pinball machine (!!) with a city/construction theme (3 balls, 50 cents, and I got the free game to boot), and an open display of the food and drink specials. Had I arrived earlier in the evening, I might have taken advantage of their $5 ‘happy meal’, consisting of 2 beef hot dogs, bag of chips, PBR pounder. I opted for the $3.75 Yards  Philly Pale Ale (I’m partial to Yards brews across the board). One guy in the north end of the sectioned off bar area away from the stage was busy tinkling the ivories on a rusted piano while the overhead music was piping a variety of songs; sometimes rap, sometimes bebop jazz, sometimes rock. 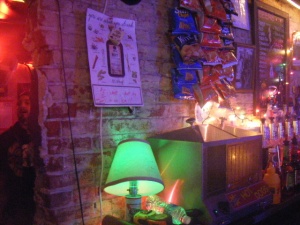 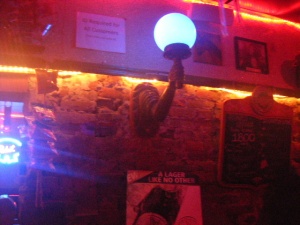 NYC punk band Rubbish was up first. They have good rhythm guitar and strong vocal chops. They admitted to screwing up a number of songs in their 40 minute set, but this was easily overlooked. The band played not one, but two songs against cops. Twice their frontman got out a can of Rust-O-Leum, and a lighter, and, yes, flames ensued! They lit up twice during the set. They covered “Man In The White Van’ by Bucket Flush (whose tshirt their lead singer proudly adorned). They finished their set with a  G.G Allin cover. One song suggested they were only in it ‘for the money and the chicks’, according to its chorus. They are quite the example of underground, sporting only a bandcamp page on the Web (which I’ve yet to find). 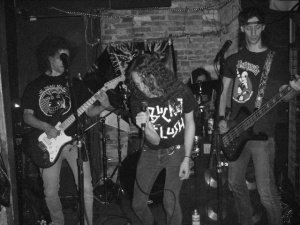 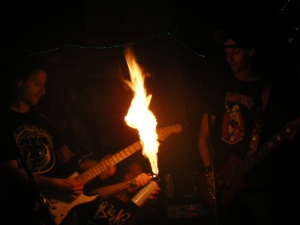 The Griswolds have been at it for some time (since 1995, in fact) with their own attractive brand of rock and punk. Lead singer RW Griswold sets up off stage and well in front, complete with plenty of tats and piercings. I was reminded of The Misfits in their song style. I came to learn that Johnny Griswold was in American Speedway, a local ‘speedrock’ band that I had seen at The Fire some months back. The band has a good engaging style that brought out a lot of folks. Lots of Griswolds merch were spotted in the audience. They are preparing a new album and it should be available late spring. 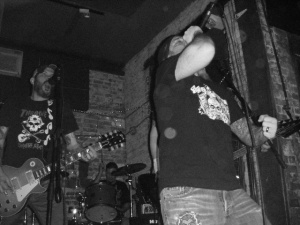 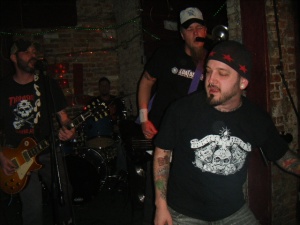 Sweet Eureka, local power punk-pop band, have a distinct sound in their style. Guitar/vox/frontman Jamie Victor played a Danelectro baritone guitar instead of his usual Fender Strat. I love the vintage sound it produces. Good songs that you can dance and rock out to. I like them a lot and will definitely look for them on future events. 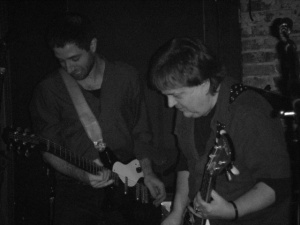 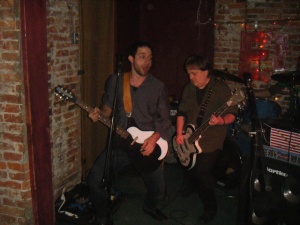 Blackout Shoppers from the Lower East Side of NYC did straight up hardcore. Frontman Seth Amphetamines was everywhere but the stage, belting out lyrics and moshing with those who dared to be in a 12-foot radius of him. The late-night crowd was busy filing in from in front and walking past the stage, including some gorgeous tall ladies whom I feared might not make it through the crowd unscathed (they got through OK tho). One of them definitely spilled her PBR. I almost took one for the team getting overhead shots of Seth. The band is out of the no-wave NYC movement, with music strongly inspired by the example set by SoCal punk bands like Black Flag. They also work their brand very well and had a lot of merch on display, much more so than the other bands combined. 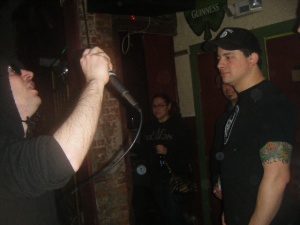 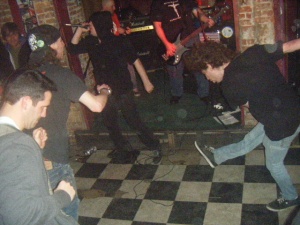 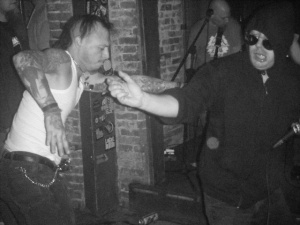 This was the night I finally left behind my trusty waterproof brown beret, which had stuck with me for 5 NYC winters. I guess it’s somewhere in the bar, if anyone cares to look for it. Good timing wtih the end of winter I suppose.
Jackie O Productions put this rocking night of music together. Next show under its name is a 2-floor affair at The Legendary Dobbs in mid-May.